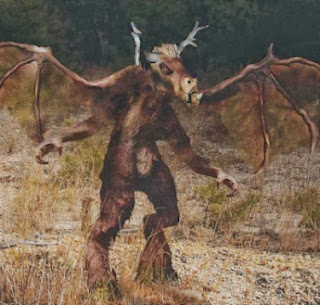 This is one of the greatest paranormal sightings that has been reported in the North. It all started around 1735 in the Pine Barrens of New Jersey . A lady named Mrs. Leeds was about to have her thirtieth child. Before she had the child she said," let this one be the Devil," or something along those lines. Her wish came true when her child came out and turned in to a devil like creature. The creature has a horse like head, horns, hooves for feet, and wings on its back. When the devil was born it killed its' mother and most of the people that was in the house only a few got away alive.
A lot of people have supposedly saw this creature, something like two thousand cases have been reported. A lot of people think that this is a made up story or a folktale. On the other hand people say how can this be fake if there has been so many people that has witnessed the creature. For the people that doesn't believe that the Jersey Devil is real there is plenty of theories to back them up. One theory is that the Jersey Devil is a descendent of a dragon that has stayed around for years. Another theory is that the creature is a pterodactyl, which is a animal that is from the pre-historical time period that has managed to survive for all these years. Possibly the most reasonable theory is that the creature is mistaken for the Hammerhead Bat. It is a classified mega bat and it has the same characteristics as the supposable Jersey Devil.

In 1909 there was an increase in reported cases about the Jersey Devil. This year was actually the most reported cases in history. There was around forty cases reported that year that were documented. Most of these sightings happened in New Jersey, however some happened in Pennsylvania. Why is this the year that the Jersey Devil was seen the most? I have not found this answer for sure but there are a lot of reasons to believe and a lot of theories out there to look at.

Going back and looking at the Hammerhead Bat theory, it is the best theory in my opinion. I think this because this bat closely matches the description of the creature. The bad has a big head, wings, small legs, and is pretty tall. I believe that this is where the legend of the Jersey Devil was created, and over the years people has added to the story and has "ran" with the story to make it seem true and real. Other than the big legend of the Jersey Devil the only thing we really have gotten out of this story is the hockey team in New Jersey named the Devils.

Additional Sources:
http://www.jerseyhistory.org/legend_jerseydevil.html
This is a historical site that tells you about New Jersey.

http://www.strangemag.com/jerseydevil1.html
This give information about the Jersey Devil and the Pine Barrens.

http://www.newanimal.org/jersey-devil.html
This site talks about cryptozoology and the Jersey Devil.