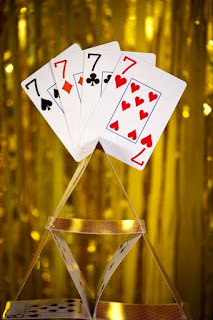 When you think of a number one through ten what comes to mind? Most people would say seven.The number seven is the lucky number of the world that is in the roles of our everyday lives. Many do not know the significance of this prime,odd,unique number in the world we live in. A Daily Mail  article shares how the number is brought up in cultures and religions all around the world and the history behind this number and the relation back to ancient times. For musicians this number is important. There are originally 12 notes in a musical scale,but the most common way of grouping is with seven notes. (Derbyshire, Davide. Daily Mail).

This number is significant in the bible. When dating back to the creation of the world god created it within six days but when that seventh day arrived it was used as his rest day.Seven symbolizes completeness and perfection. That leads to the creation of our weekdays. A completed week consist of seven days.The number seven occurs multiple times in the bible for several different reasons. This number is said to bring about great things for us, challenge us, and even judge us. For sacrifice of an animal the bible states that they must be at least the age of seven before they are able to be sacrificed. (What is the Biblical Significance of the Number Seven).


When looking into the make of our world it is made of 7 seas and 7 continents. If you look into studies there are originally eight planets, but some do not think of Jupiter as a plant which takes it down to seven. When thinking of a rainbow, colors are usually all a person thinks of and the acronym “ROY G BIV” which is for red, orange, yellow, green, blue, indigo, and violet but take into thought the number of letters there are seven right? When Isaac Newton first thought of the colors there were only five but later two were added. Anna Pukas the author of Express describes the world’s seven wonders: the Machu Picchu, Chichen Itza, Colosseum, the Great Wall of China, Taj Mahal, the statue of Christ, and the rock city of Petra. (Anna Pukas, The Magnificent 7)

The number seven will forever be the number of the world, and the luckiest of them all.When first used for the simplest of things no one thought it would have the reoccurrence it does. Randomly asking someone to give facts or information about this number the responses would mostly consist of the obvious, it is a prime odd number that is only divisible by itself. There are deeper ways of thinking into this number with interesting concepts and theories that relate together in creating our world the such a distinctive number.

“What is the Biblical Significance of the Number Seven?” YouTube, 30 November 2017.

Pukas, Anna. “The magnificent 7: The meaning and history behind the world’s favorite number.” Express,10 April 2014

Daily Mail “Why Lucky 7 Really Is The Worlds Magic Number”
www.dailymail.co.uk/news/article-2601281/
This source from daily news gives more information on the things that the number seven relates in you our creating of a day and the make of the world.

The Magnificent 7
www.express.co.uk/news/uk/469565/The-magnificient-7-The-meaning-and-history-behind-the-world-s-favourite-number
This web source by Anna Pukas of the Express provides additional informational about  ancient history and the number seven.
Posted by Dr.Ms.Amanda at 11:37 AM