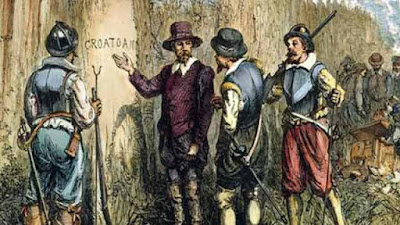 August 1590 brought the occurrence of one of the most puzzling mysteries in history. As John White arrived too England in order to gather supplies he came across a war between England, Spain, and Queen Elizabeth I. Three years later John White returned to Roanoke. When White left in 1587, he left in his wife and daughter, his infant granddaughter and some other settlers. He came back with no proof or evidence of the colony, including the entirety of his family. The only clue he did discover was the word “Croatoan,” which was carved into a wooden post. The “Lost Colony” is still under investigation, and there are plenty of theories and conspiracies which are laced with what little evidence exists, but science and anthropology have yet to yield an affirmative answer to the question of the “Lost Colony.” Although, “Croatoan” was discovered to be the name of an island South of Roanoke, it was founded to be the home of native Americans. Studies state that perhaps the colonists were killed or abducted by Native Americans.

Conway, Stuart. “It Was America's First English Colony. Then It Was Gone.” The Search for the Lost Colony of Roanoke, July 3, 2018. https://www.nationalgeographic.com/magazine/2018/06/lost-colony-roanoke-history-theories-croatoan/.

“The Lost Colony of Roanoke: 8 Theories About the Mysterious Island and Its Inhabitants.” History Collection.co, 15 Aug. 2017, https://historycollection.co/lost-colony-roanoke-8-theories-mysterious-island-inhabitants/.

For even more leads than this article provides:

“What Happened to the ‘Lost Colony’ of Roanoke?” History.com, A&E Television Networks, 3 Oct. 2012, https://www.history.com/news/what-happened-to-the-lost-colony-of-roanoke. This article discusses one of America’s oldest unsolved mysteries traced back to August 1587. After settling, John White, governor of the new colony sailed to England to get fresh supplies. Three years after returning, he found no trace of the colony, including his wife and daughter. The only thing that was left was the word “Croatoan” carved on a wooden post.

“Roanoke Island.” Wikipedia, Wikimedia Foundation, 23 Sept. 2019, https://en.wikipedia.org/wiki/Roanoke_Island. This article focuses on the main history of Roanoke Island, the birthplace of America’s first English child. Located on an island in Dare County on the outer core of North Carolina.

“Haunted Roanoke.” Colonial Ghosts, 7 Oct. 2017, https://colonialghosts.com/haunted-roanoke/. In 1998 archaeologist and historians discovered an extraordinary golden ring engraved with a prancing lion. Unfortunately, there was a huge misconception and researchers had it all wrong from the start. The ring had a numerous amounts of lab test ran on it. After being sent to east Carolina University, archaeologist “Charles Evans” was appalled by the results. The purpose of this article is to showcase why and how the research was wrong. What is distinctive about this article is the actual artifact that was found.