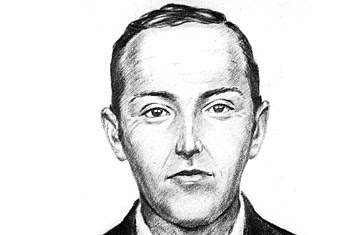 Looking at this picture, one may be curious as to who this drawing is of and why he is drawn. This is D.B.Cooper. Cooper was known for hijacking the aircraft that was known as the Boeing 727 aircraft . D. B. Cooper is an unidentified manin the northwest United States, in the airspace between Portland, Oregon, and Seattle, Washington, on the afternoon of Wednesday, November 24, 1971. He used the alias “Dan cooper” but because of miscommunication, he was known as “D.B.Cooper. He boarded the plane and had a briefcase, and a note. He demanded for $200,000 in ransom money and threatening everyone on board for the money. He asked Tina Mucklow, the flight attendant at the time, asking for her to sit beside him. Doing as he pleased, she sat beside him and Cooper handed her a note that said “I have a bomb.” The news got out to the pilot and was forced to stay in the plane and let every other passenger off. They flew over near the Seattle area and get received two parachutes and the money and jumped out, never seen again. Despite an extensive manhunt and protracted FBI investigation, the perpetrator has never been located or identified. It remains the only unsolved case of air piracy in commercial aviation history.

However, over the years there have been information on people who may know who the real D.B. Cooper is. For example, a women who claims she knows him and related,  Marla Cooper thinks she knows who D.B. Cooper is. She believes her uncle, Lynn Doyle Cooper is D.B. Cooper. Marla Cooper, 48, first told her story on ABC's Good Morning America and later on CNN, where she said she had provided investigators with a guitar strap made by her uncle for DNA testing. She said she never saw her Uncle after 1971, around the same time D.B. Cooper went missing. Later, she said her Uncle L.D. showed up bruised and bloody and said he had been in a car accident. She then proceeds to say her uncle said “We did it, our money problems are over. We just hijacked an airplane. It is a case that was never solved. FBI maintained an active investigation for over 45 years, and still has remained unsolved. The FBI officially suspended active investigation of the case in July 2016, but the agency continues to request that any physical evidence that might emerge related to the parachutes or the ransom money be submitted for analysis.

There have been some well known theories with this case. Some theories were to believe that he died of the fall. He wasn’t dressed for the appropriate “skydiving” and anyone who was a skilled skydiver would know what to wear. The parachute that he originally got was for training, and wouldn’t of been able to be opened because it was sewn shut. The weather was cold and dark and he was not dressed for the cold and jumped into the middle of land and sea, and was never found after that. Another theory about Cooper was that he actually did survive based on this video of “surviving evidence”.

https://en.wikipedia.org/wiki/D._B._Cooper
This link directs you to a website that tells you what who D,B, Cooper is and why he was known as the :Mystery Man”

https://www.express.co.uk/news/world/1179927/db-cooper-found-plane-who-is-fbi-files-cia-robert-rackstraw
This website gives information on another possible person who thinks they have solved who Cooper is, which according to the link is Robert Rackstraw.

https://listverse.com/2019/04/06/10-interesting-facts-about-the-mysterious-d-b-cooper-case/
This site contains facts about the Cooper case that could potentially be important.
Posted by Dr.Ms.Amanda at 7:32 AM