The Devil’s Bible: Written by Satan Himself?

Well, probably not. But when a mysterious manuscript with no known origin turned up and contained a full-page illustration of the devil, people were eager to create a legend that has stuck around with the book for hundreds of years. 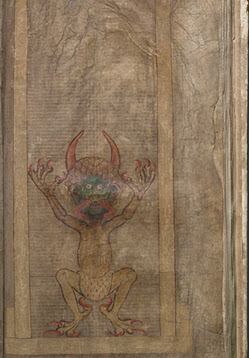 The Codex Gigas, a.k.a. the Devil’s Bible, stands at nearly three feet tall and is over a foot and a half wide, which makes sense for a manuscript whose name directly translates to “giant book.” (Clearly whoever named it was very creative.) The book contains 310 parchment leaves, with 212 lines of writing on each page, save for two fully illustrated pages which bore the legend of the Devil’s Bible. The first illustration is a depiction of heaven, not uncommon in the time period the book is from, but across from that page is an illustration unlike any other during that time.

On the page opposite of the illustration of heaven is a full-page depiction of the devil, which just so happens to be followed by a short text on exorcising demons. The book also contains the Christian Bible, an encyclopedia, and four other long texts, as well as a few more short texts.

While no one knows the true origin of the Codex Gigas, the earliest records of this mysterious manuscript date back to 1295, where it was pawned to a monastery in what is now the Czech Republic. The book was taken to Prague in 1594 by Rudolph II, where it stayed until the Thirty Years War. During the war, it was looted by the Swedes with many other valuables and moved to the National Library of Sweden, where it remains today.

There are many theories as to who created the Devil’s Bible and why, but the most popular theory by far is the legend that gave the book its Satanic nickname. The legend states that a monk was forced to write the book in one night, perhaps to atone for his sins, so he sold his soul to the devil to finish the impossible task. As interesting as this theory may be, it is estimated that the Devil’s Bible would have actually taken twenty to thirty years to complete, if it is taken into account the sheer amount of words, which were likely written using ruled guidelines, plus the illustrations, plus decorations adorning the manuscript.

National Library of Sweden
http://www.kb.se/codex-gigas/eng/
This page has official information on the Codex Gigas, directly from the source.

National Geographic
https://blog.nationalgeographic.org/2008/12/17/devils-bible-darkest-secrets-explained/
This source contains insight on a documentary about the Codex Gigas.

Mysteries of the Bible
https://web.archive.org/web/20110210124457/http://channel.nationalgeographic.com/series/mysteries-of-the-bible/3619/Overview15
This source has a video and more information about the Devil’s Bible.