Crystal skulls are a hardstone carving of a human skull made up of quartz. They began being made around the 19 century and are claimed to be pre-columbian mesoamerican artifacts. Although where crystal skulls actually originated from has been refuted by scientist for years. Crystal skulls should not be considered uncommon or terribly mysterious because thousands are produced every year in China, Brazil, and Germany.

Crystals aren't always meant to represent something or mean something. A Lot of times they are simply just a hardstone carving of a skull. They are made with alot of detail and the quartz can be very translucent or transparent. Some people admire them for nothing more than the great craftsmanship behind them. Whether you see them as spooky or fascinating they are still extremely interesting artifacts either way. Although according to certain cultures, crystal skulls represent more that just a hardstone carving. In an article written by Shanna Freeman she states “crystal skulls are sometimes meant to represent doom and destruction and sometimes hope and healing.” She goes on to say how some cultures use them as crystal balls to see into the past, present, and future claiming that the skull emitted psychic energy. Shanna pointed these beliefs toward the Mayan culture. There is a creation myth in their culture that 13 crystal skulls were scattered by the mayans thousands of years ago to be discovered and reunited in modern times. This is only one of the many mysteries that come along with crystal skulls

The most thought upon questions that come up on crystal skulls is their history. Researchers, scientist, and archeologist are all dragged into discovering more on the history of these interesting artifacts. Some believe that crystal skulls date back hundreds of thousands of years ago and may be a relic of lost civilizations. Such as the ones that you can see in the British Museum.

The british museum along with smithsonian institution had done recent electron microscope analysis on crystal skulls. These analysis revealed markings that could only been made with

modern marking tools. Clearly researchers struggle to come up with where, how, and when crystal skulls actually came from. An article found on National Geographic offer a chance for readers to better understand what history scientist and researchers have happened to found and been able to back up. In the article it states that the crystal skulls in the british and smithsonian museum date back to the mid and late 1800s. In the article author Richard A. Lovett describes these times as “a time when public interest in ancient cultures was high and museums were eager for pieces to display.” The rumor is that the british museum displayed skulls with crystal said to be “found in Brazil or Madagascar and thus inaccessible to pre-columbian indigenous civilizations.” No one knows who made these crystal skulls and when because there was no way for scientist or archeologist to accurately determine the age of an inorganic object like the skulls. 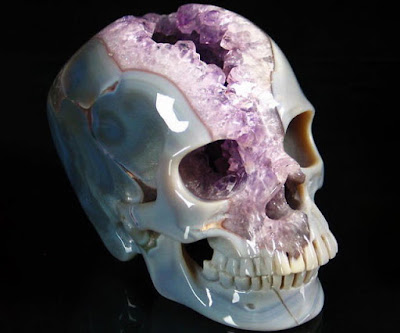 2)Garvin, Richard M. The Crystal Skull: The Story of the Mystery,Myth and Magic of the Mitchell-Hedges Crystal Skull Discovered in a Lost Mayan City During a Search for Atlantis. , 1973.

“Crystal skulls”. World-mysteries.com
https://www.world-mysteries.com/strange-artifacts/out-of-place-artifacts/crystal-skulls/.
This source mainly covers the mysteries behind crystal skull. The author talks on how fascinating they are and how they had an impact on archaeology in the 20th century. This article is meant to inform us about the how they are created and mystical stories that come along with them. This source is unique because it links the crystal skulls with aztec and mayan culture and allows people to respond on the subject themselves, giving me different views from the subject. This article is drawing attention to more of an audience who has something to say on the topic themselves and are interested in mysteries.

“How crystal skulls work”. Science.howstuffworks.com
https://science.howstuffworks.com/science-vs-myth/unexplained-phenomena/crystal-skull.htm.
In short this article explains what all crystal skulls are exactly made of. They describe where the materials to make these skulls come from and how they are made. This article is informing us readers how crystal skulls work and what they are made up of. The fact that this website provides information on what crystal skulls are made up of makes it unique. They describe what exactly
kind of crystal is used for the skulls which will be very beneficial information to my paper. This article is aimed towards a more scientific audience. People who care for the science behind things.