Alice of the Hermitage

Since the 1950’s there have been tales of a young woman named Alice Flagg searching a hermitage for her lost engagement ring. The strange this is that Alice Flagg died in 1949. The Hermitage, located in Murrells Inlet, South Carolina, does not seem like a place a ghost would be found. It is a quiet peaceful place where Alice spent her early years life living with her wealthy older brother and mother. There is simply nothing haunting about the home where Alice grew up, or so it seems. 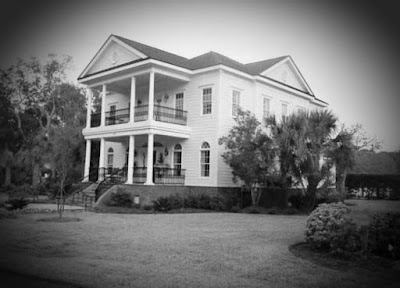 Alice’s family expected her to fall in love and marry a wealthy man equal to her status. They did not know she had already fallen in love with a poor lumberman and recently became engaged to him. When her brother found out, he was overly vexed. Alice was sent off to boarding school, but soon after she fell extremely ill. When she returned home, she was bedridden, but her brother noticed the ring hanging around her neck. As Virginia Lamkin explains in her article called  “The Hermitage's Alice Flagg” , the ring was tossed into the nearby marsh never to be seen again. Shortly after Alice died. Some people may say she died of her sickness known as malaria, but many also think she died from heartbreak. Alice was buried on the plantation because a decision could not be made on where to bury her. She was buried in a glass casket wearing her favorite white dress that she wore when she met her lover.

Shortly after her death, a woman and her son came to visit the Flagg family. During their stay, the boy asked his mother who the pretty girl in the white dress was in his room. A resident overheard the boy and his mother, and she recognized  the girl he described as Alice Flagg. A couple weeks pass, and Alice appears in the garden to a family.

Alice has been appearing to people over the past sixty five years. Sometimes she is seen wandering through the garden in the light of the moon, presumably looking for her lost engagement ring, and other times she is seen sitting on the windowsill of her old room. People to this day are intrigued by the beauty, kindness, and grace of this ghost when she appears at the hermitage she cared so much for. Like many ghost stories, the story of Alice Flagg is rooted by heartbreak and forbidden love.

For even more information than this article provides visit:

Roberts, Nancy. “South Carolina Ghosts: From the Coast to the Mountains.” Columbia: University of South Carolina Press, 2013. Project MUSE. https://muse.jhu.edu/chapter/850541. This essay by Nancy Roberts explains a time when she and her husband went to the hermitage in search of Alice Flagg’s grave.

“The Hermitage - Murrells Inlet, South Carolina.” South Carolina Picture Project, www.scpictureproject.org/georgetown-county/the-hermitage.html. This essay, written by an unknown author, describes the story of Alice Flagg as a folklore and historical legend.

Evelyn, Jamilah. “This Ghost Story Has a Certain Ring.” Community College Week, vol. 15, no. 24, June 1998, p. 18. EBSCOhost, http://search.ebscohost.com/login.aspx?direct=true&db=aph&AN=786675&site=ehost-live&scope=site. This essay, written by Jamilah Evelyn, is written as documentation of a ghost story. Evelyn wrote this story to inform readers about the supernatural encounter she had with the ghost of Alice Flagg.