Tucked away in the mountains of West Virginia lies a decaying old town with a growing problem. In 1864, West Virginia opened the Weston State Hospital. At the time, mental illness was yet to be considered a real medical issue, rather than someone who went crazy. Thomas Kirkbride believed there was a way to cure people of their mental illness. The design of the hospital was intended to have about 250 mentally ill people in solitude. The Kirkbride design became the standard in the US and beyond for mental hospitals and lunatic asylums. As the second largest hand-cut stone building and one of the first treatment facilities for those with mental illnesses, the Weston State Hospital seemed to be an excellent solution to the increasing population of mentally ill during and after the Civil War. 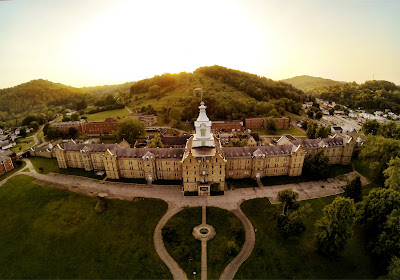 However, this mostly self-sufficient Utopia-like campus for those rejected by society quickly became a never-ending nightmare for the patients, workers, and the state itself. In the first ten years, the Weston State Hospital was operating as expected. While patients were not just magically getting better, it was an excellent solution as to where to put those who could not live in the general public. Soon, however, the stigma surrounding what we now know as mental illness increased massively and the number of patients grew at a huge rate. By the turn of the century, there were almost 1,000 patients and at its largest in the 1950s, the were over 2,600 patients on the grounds intended for 250. The overcrowding caused fights between inmates, disappearances that went unnoticed for weeks, and violent ends to an overwhelmed staff.

The numerous deaths of patients and workers of course created the idea of haunting and a concentration of ghosts in the building. One girl, who was born and died in the facility, is said to roam the halls looking for a playmate. Another inmate is said to turn lights of and off if offered a cigarette. Continue to put more stories here, at least one more.

In 1994, a new psychiatric facility was finished in West Virginia and the Weston property
was auctioned off in 2006 and renamed the original unofficial title of the Trans Allegheny Lunatic
Asylum. Now, tours are offered most of the day and through the night. You can get an hour and
half “historical” tour or a slightly longer two hour “ghost” tour during the day. These guided tours
focus on the history of the hospital while including a few ghost stories along the way. From 9pm to
5am, a ghost hunting tour is also offered. This is where the real “experiences” happen as tourists
are allowed to roam the halls free with whatever approved ghost hunting tools they could bring
along.

Kashino, Marisa. “I Spent the Night in a Haunted Asylum and I Still Can’t Explain What I Saw.”
The Washingtonian. Oct. 25, 2018. https://www.washingtonian.com/2018/10/25/i-spent-
the-night-in-a-haunted-trans-allegheny-lunatic-asylum-and-i-still-cant-explain-what-i-saw/