Alligators In The Sewers

There are many different stories on how exactly alligators get into the sewer system. But there are questions if it is true, or just a myth. In the late nineteen twenties and early nineteen thirties there was a popular story of a group of kids who was shoveling snow into a manhole. In that manhole, an alligator was found. No evidence was shown because the alligator attacked the children making the children with no choice but to kill it. Another one of the big stories on how alligators might have ended up into the sewers was by families giving their children baby alligators as pets. When the alligator grows too big and the family was unable to handle the reptiles, they would flush the creatures down the toilet.

On some accounts about alligators, there was pictures and videos to show evidence of alligators in the sewers. Some pictures showed construction pulling out an alligators with rope around the mouth to keep it from attacking. Other evidence that was given was a video on an alligator standing still in a drain just staring at the camera. The alligator did not move or attack. But one thing that stood out in the video was a ball in front of the alligator. Possibly the reptile was looking for someone or something to come down and get the ball, so it could attack. 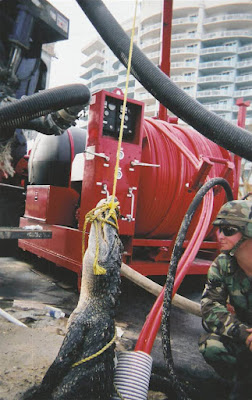 Gormley, Jesse. “Could Alligators Survive In The Sewers of New York City?” Ripley’s Believe It or Not!, July 2018, https://www.ripleys.com/weird-news/alligators-cant-live-in-the-sewers/.

Links for further research:
“Do Alligators Attack Humans?
http://animalquestions.org/reptiles/alligators/
Although crocodiles attack anything that moves in their sight, alligators are different. Alligators only attack when they feel threatened or their young is at harm. The female alligators give a warning when they feel they feel like they are being attacked. They give a hissing sound or they will open their mouth to let you know, to back off. Once you back off, then you won't be a meal. Most alligators eat fish but if they are hungry enough they will eat and find anything up to human size.

“Do Alligators Hibernate”
http://animalquestions.org/reptiles/alligators/do-alligators-hibernate/
Alligators are cold blooded.They have to stay in warm areas in order to live. Alligators have common sense to move to different locations to find heat. If the environment is too cold for them, they will try to go underground to find warmth. Even though they need warmth to live they are able to be in 40 degree Fahrenheit climate.

“Alligators of the Sewer- Real Ones!”
http://crazzfiles.com/alligators-of-the-sewers-real-ones/
In the early nineteen hundreds, an alligator was found in the sewers of New York City. New York City, Commissioner of Sewers, Teddy May, was told many stories on alligators living in the sewers, but he did not want to listen to them at first. He decided to investigate himself after hearing so many stories.
Posted by Dr.Ms.Amanda at 1:39 PM