Supernatural creatures since then until now has constantly created controversy and debates between believers and non-believers. Society has always tried to separate what is real and what is fake. And in today’s technology ruled world, it is hard to separate the two. The Slender Man is a product of todays technology environment. It took a site and one man to use the advancements we have now to create fear, confusion and arguments. Originally Slender Man was created back in 2009 by a man named Eric Knudsen but goes by Victor Surge on the website called Something Awful. He designed Slender Man to compete against other participants to photoshop existing pictures. This design started off as him portraying to be a tall, weird, slim, spider-like photoshopped in between children playing.


This picture soon ended up becoming viral. Soon people started inserting Slender Man into videos, photos, and games. Soon the internet plastered this image and newfound character into the brains of the people. This created newfound conflict between people who believe in supernatural and those who do not. People who did not believe did research and have proof that he is not real.
This man was showing why the slender man is not real

While the people who do believe made videos that showed that they believe he is real.

Man recording his children while catching Slender Man on film

Watching videos and seeing people post their thoughts could be challenging to believe if brought to attention by a person who does not know who he is. Slender Man raised an audience who was aware of who and what he was, but a different audience arose as well, the ones ignorant to the origin of the so-called legend. Unfortunately, Slender Man brought about unnecessary violence. In May of 2014, two girls named Morgan Geyser and Anissa Weier brutally stabbed their classmate Payton Leutner. Those two girls blamed the Slender Man in that stabbing because they believed that carrying out that deed would please the Slender Man and would stop him from harming their families. 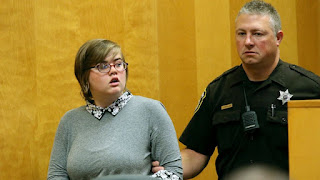 One of the girls charged with stabbing

These girls were tried as adults. The story that had unraveled was that Geyser and her co-defendant Anissa had lured the victim Peyton from a sleepover into a nearby wooded park. Geyser had stabbed her 19 times while Anissa had encouraged her to do so, leaving Peyton for dead when finished. These girls were 12 at the time.

This proved some people views on the Slender Man to be true, that he does in fact prey on children. But unfortunately for them, there is no known proof on whether they were telling the truth. How can a photoshopped picture make such an impact? We will sadly never know what goes on in society brains or what other people can see. But what we do know, is that since the creation of this technology made legend, it has cause much debate over whether he’s real or not.

Bonner, Mehera “The True Story of Slender Man Is So Much Creepier Than You Ever Realized” Sweet dreams!  https://www.cosmopolitan.com/entertainment/a22994728/slender-man-true-story/   October 24, 2019

This article talks about how Slender Man started off as a photoshopped picture. And the children that took his existence way too serious and had some life changing effects.

Bauer, Scott “1 of 2 girls convicted in Slender Man stabbing loses appeal” One of two Wisconsin girls who repeatedly stabbed a classmate because she believed a fictional horror character named Slender Man would attack her family if she didn’t kill the girl has lost an appeal https://abcnews.go.com/US/wireStory/girls-convicted-slender-man-stabbing-loses-appeal-72329368 August 12, 2020, 1:09 PM

Dewey, Caitlin “The complete history of ‘Slender Man,’ the meme that compelled two girls to stab a friend” https://www.washingtonpost.com/news/the-intersect/wp/2014/06/03/the-complete-terrifying-history-of-slender-man-the-internet-meme-that-compelled-two-12-year-olds-to-stab-their-friend/ July 27, 2016 at 12:30 p.m. EDT