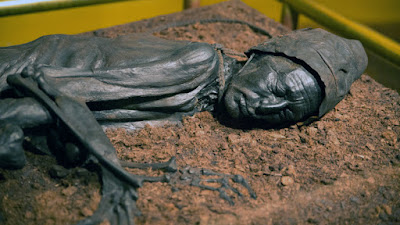 Bog Bodies are humans that have been remarkably well preserved in the ground for thousands of years due to the acidic, oxygen-poor conditions of peat bogs, which are made up of accumulated layers of moss. Archaeologists have been finding these bodies since 1640 when the first figure was found in Holstein, Germany by a local farmer.

The bogs were reserved as dumping grounds of those who had either been brutally murdered or offered as human sacrifices to the gods. Behind the sad stories of the deaths, they leave valuable clues for us today, showing how their people may have lived, how they worshipped, and what was used to cause the death.

The Tollund Man, the most well-preserved, best looking bog body found to this day. He lived during the 4th century BC, also referred to as the Pre-Roman Iron Age and was found in 1950 on the Jutland Peninsula in Denmark. The body’s physical features were so well-preserved, he was mistaken at the time as a recent murder victim that was buried in the ground. He was found wearing a painted skin cap made of sheepskin and wool with a smooth hide belt around his waist. Additionally, the corpse had a noose made of animal hide tight around the neck and trailing down his back. Many believe the man was a human sacrifice rather than a executed criminal because of the arranged position of his body, and the fact that his eyes and mouth were closed.

In 1965, the German scientist Alfred Dieck, catalogued more than 1,850 bog bodies, but later scholarship revealed that much of Dieck’s work is incorrect. Hundreds of bog bodies have been recovered and studied, although it is believed that only 45 bog bodies remain intact today.

Were the Mysterious Bog People Human Sacrifices?https://www.theatlantic.com/science/archive/2016/03/were-europes-mysterious-bog-people-human-sacrifices/472839/
This site runs through some of events the bog bodies experienced before death by observing their body parts, looking for gashes, shatters, or things missing.

Bog Bodies
https://www.nationalgeographic.org/media/bog-bodies/
On this site, there is a four minute video about archaeologists using their knowledge of chemistry, geology, and human behavior to better understand the circumstances that led to the gruesome deaths.

10 Ancient Bog Bodies That Will Amaze You
https://listverse.com/2017/01/28/10-ancient-bog-bodies-that-will-amaze-you/
This site goes through ten of the most significant bog bodies found in history with an explanation on how it was found, cause of death and what we can learn from that specific corpse.