The Hauntings of St. Augustine, Florida

As we draw near the spookiest day of the year, October 31st, you may find yourself craving a creepy experience of your own. As it turns out, there is a bone-chilling city that you can visit all year round: St. Augustine, Florida. Although it is small, St. Augustine is known for its many haunted locations that are allegedly filled with the spirits of past residents.

One of the most iconic haunted locations in St. Augustine is the city’s Old Jail. It is located in St. John's County  and attracts thousands of tourists every year. It served as the county jail for over 62 years, and during its time, you would not find happy tourists within its walls. The poor conditions of the Old Jail caused it to receive multiple citations. Dana St. Claire, director of St. Augustine 450th Commission, described the inmates as being “sentenced to death” upon their arrival. The inmates were packed into cells, sometimes hoarding up to six people in the small rooms. 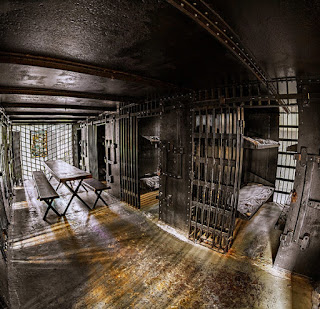 In another part of town, on the western side of Matanzas Bay, the Castillo de San Marcos stands tall. It was built in 1672 and initially served as a Spanish fort to hold prisoners of different Native American tribes. According to a legend, hundreds of years later, a local architect wandered into the fort to explore. After hearing a hollow sound from one of the walls, he decided to investigate. Inside, he found the hanging remains of two people who were believed to be the missing lovers, Delores and Manuel who went missing in 1784. Today, there are many reported sightings of unidentified figures including the “shadow man.” Those who see him, mostly staff members, describe him as a tall and very built man. Since the figure is allegedly so human-like, they report “waiting for him to move so they could continue taking pictures.” The military fort is currently open for both tours during the day, for the history, and during the night, for thrill seekers praying for a ghost sighting.

Another one of St. Augustine’s most famous attractions is its haunted lighthouse. It was the first of its kind to be established. The lead producer on A&E’s “Ghost Hunters,”  Steve Gonsalves, describes the monument as “the Mona Lisa of haunted sites.” In 1871, after Americans discovered the lighthouse was sinking, it underwent extensive remodelings and it was almost completely reconstructed. The overseer of the task had many children and consistently brought them to the work site. One day, the children were roughhousing and riding around in a cart when it toppled over, sending them down a hill into the water below. Two of the three children drowned. Their spirits are rumored to haunt the island, which is probably why a lot of the ghost reports are of very young children. Workers report children’s laughter in the middle of the night as well as music boxes in the tower’s gift shop popping open and playing by themselves.

St. Augustine’s long and dark history leaves plenty of room for theories surrounding the ghosts that may reside in its many historical sights. There are new ghost sightings every day. From the many conspiracies of people being buried alive to the old conditions of the Old Jail, these theories aren’t implausible. The dark history of St. Augustine sparks arguments from all sides, and in my opinion, will forever be known as one of the eeriest towns in all of America.

https://www.ghostsandgravestones.com/st-augustine/haunted-places
This website provides additional information on the alleged most haunted locations in Florida and around the country.

https://www.wheretraveler.com/st-augustine/play/st-augustines-haunted-history
This webpage provides information on the history of St. Augustine and its haunted past.

https://www.floridashistoriccoast.com/blog/ghost-tours-and-spooky-haunts-st-augustine/
“Florida’s Historic Coast” provides information about the best ghost tours and paranormal experiences in St. Augustine based on experience.