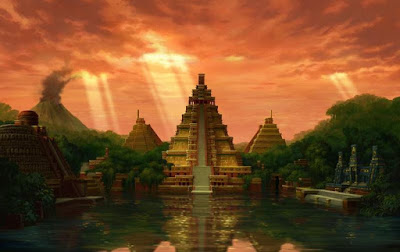 The El Dorado myth is a theory that began in the early 16th century, with the Spanish explorers reaching out to the south Americas when they discovered the native tribes that were residing there. There were four big tribes of the Americas: the Aztec, Mayans, Incas, and the Musica. The Musica tribe was discovered around 800 and 500BCE (meaning Before Common Era). This tribe was known as the Musica, or Chibcha, and were a civilization that sparked the myth due to their inexplicable amount of gold! The musica held ceremonies of going across the lakes such as Lake Guatavita , throwing gold in large quantities into the lake to sacrifice to their water gods. Not only did they sacrifice gold and jewelry to the lake, but all the natives also had a outrageous amount of gold in their possession as well! This was the drive to find the trove that they must have, a place where all the gold resided, a city of gold.

The Chibcha tribe had a ceremony before being able to appoint a new leader to the role. Before being able to take the role of leader, they had to go through trials to earn it. The new ruler had to spend time secluded in a cave not being able to see women, eat salt, or go outside during the daylight. The trial before that was the journey across the Lagoon of Lake Guatavita and make sacrifices to a demon that they worshipped as their god. The raft was made of rushes and decorating it with what they had that grabbed the eye, all while burning incense on their braziers. This would cause smoke that would hide out the light of day. The new ruler was stripped to bare skin and covered him in dirt to throw gold dust on him, so he was completely covered in cold dust. He was then placed on the raft and his feet were resting in a heap of gold and jewels to offer to his god. The ceremony was called El Dorado, took many people’s gold hungry lives.

The Lakes they sacrificed to, such as Lake Guatavita, have been a known tourist attraction whilst going to South America. The tourist attraction will tell you the lore behind the myth of El Dorado, also allowing you to see the lakes that were associated with it. They allow you to go see the lakes, that are almost all perfectly circle, and learn about the story that the Chibcha tribe did. The Chibcha tribe is extinct, but the tale still lives on.

Anny Wooldridge. “The Story Behind the Legend of El Dorado”. Culture Trip, May 18, 2017, https://theculturetrip.com/south-america/colombia/articles/the-story-behind-the-legend-of-el-dorado/.

BBC News on El Dorado: The truth behind the
https://www.bbc.com/news/magazine-20964114
This news article gives incite on archeologists, real people research to find it, and real traditions kept alive while in their search for the myth in current times.

The Codex Gigas: The World Library
https://www.wdl.org/en/item/3042/view/1/1/
The World Digital Library (a U.S. Library of Congress project) has digitized the Codex Gigas. At the link above visitors can read the entire Codex Gigas in high-resolution digital format.

Meet the Musicas, the urban indigenous people of Bogota
https://www.bbc.com/news/av/world-latin-america-21062727
This short video, along with short description, gives incite of where they are now. It shows where they have tried to bring back their culture.