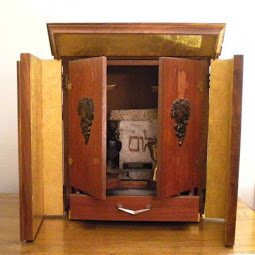 The dybbuk box is an a haunted wine box that you may not have heard of, but you may have been haunted by. The box was bought by a furniture store owner in 2003, who discovered that he made a mistake buying this not so innocent box. When furniture store owner Kevin Mannis Stumbled upon the box at an estate sale he knew it was too god of an offer to pass up. He bought the box and took it to his store, but he soon realized that the box was no ordinary box. He was told the the person that owned the estate survived living in a concentration camp and that the box was one of three things that she brought back with her to the United States.

The granddaughter of the estate owner was luckily able to give a little background to the history of the Dybbuk Box. After Kevin Mannis bought the box she approached him and commented on the box. She told him how serious her grandmother was about never opening the box, and that the box was to be buried with her grandmother. This went against Jewish rules of burial so she did not bury the box. Kevin offered to let her keep the box as it seemed to be important to the family, but she insisted that because he bought it he should keep it.

Kevin Mannis sold the box on Ebay and since then it has been sold many times. Every owner seems to become more and more desperate to get rid of the box. Kevin decided to give the box to his mother for mothers day. Terrible things happened to his mother only hours after he gave her the box. She suffered a stroke and became partially paralyzed. His sister began to take care of their mom and she learned very quickly that the box had some sort of darkness to it. She would leave the box and come back to the doors wide open. She did not want to keep the box so she put it on the steps of his store with a note that said, ”This has a bad darkness”.

Kevin Mannis said that he himself also experienced terrible things while owning the box. He had nightmares nearly every night and he began to see shadows walking in his peripheral view. Some how there was an association with the box and cat urine. Kevin had never owned a cat but he smelled cat urine when around the box. His sister said that she also smelled the same thing around the box. One night he woke up from a nightmare to the feeling of someone breathing on his neck. He then saw a shadow walking away from him down the hallway.

In Kevins Ebay post he expressed the idea that he wanted to destroy the box but was unsure of what may happen if he did. He was worried if he destroyed the box, whatever haunted it may stay with him. He sold the box to a bidder, but made a few updates to his sale. He said that he is not religious but would appreciate prayers from anyone, He also said that people asked if he was still experiencing strange events. He responded, “I thought everything was going OK until I got home on Friday - the 13th of June - and found that the fish in my fresh water aquarium - all 10 - were dead.” Maybe that was coincidental but still, creepy.

Since the sale of the box Kevin has not had much involvement, however he did answer a few questions. He revealed that the story of the Dybbuk box was completely made up and it was not true. He never expected it to become so popular. I think that he did a great job creating such a detailed story. There was definitely more to the story than I shared, so if you want to read more you can read more HERE. The story is very interesting to read so I recommend reading about it. It is a great story to spend some time reading about if that is something you enjoy doing

Moss, Charles. “Finally, the Truth behind the 'Haunted' Dybbuk Box Can Be Revealed.” Input,
Input Magazine, 8 July 2021, https://www.inputmag.com/features/dybbuk-box-dibbuk-
kevin-mannis-zak-bagans-haunted-hoax-revealed. 17 October 2021. This source
discusses the story and truth behind the Dybbuk Box. It talks about a movie that inspired
the box, and about a certain celebrity that was spooked by it.