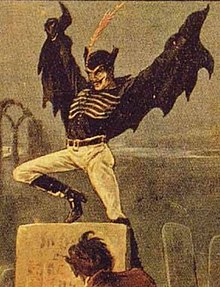 n 1830’s South London , mysterious stories occurred about a devil-like figured person attacking women. He was said to have the resemblance of a gentleman, tall and thin, he wore a black cloak and white fitted garment . He has sharp metallic claws, his eyes had red balls of fire in them and he could breathe blue and white flames. He was given several different names such as, Peckham Ghost and Park Ghost. Only two people can confirm he spoke English and he had springs that helped him escape after every attack. The first reported sight of Spring-Heeled Jack was in 1837, the first newspaper appearance was January 9, 1838. According to Wikipedia, the first sighting was in September, when a businessman returning home late on night, was shocked by a strange creature jumping easily over the high railings of a cemetery. The businessman said that Spring-Heeled Jack apparently had large pointed ears and nose with glowing eyes.

Shortly after Jack proceeded towards the north west of England to do more attacks. The first report made more people of London come forward. In October 1837 , a girl named Mary Stevens was walking to her job after visiting her parents house. While she was walking a figure leaped at her, he immobilised her by tightly grabbing her arms then kissed her face. She claimed he ripped her clothes off and scratched her skin with his claws. When she started screaming Jack leaped off fleeing from the scene. The scream was heard by local residents who ran out to help Mary and immediately started looking for the attacker who had already vanished within minutes. 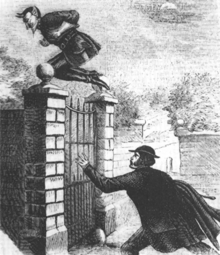 He would make his attacks targeting women. Spring Heeled Jack would perpetrate his attacks by ringing the doorbell of women's homes and when the lady answered he would rip their clothes off or he would sometimes harass walking pedestrians. The attacks got worse as time went on. The biggest attack was in February 1838, a random man rang Jane Alsop's doorbell, he was acting as if he was the police claiming he caught Spring-Heeled  Jack and needed help. As Jane went to help the man, he  started to blow blue flames in her face and rip her clothes and skin with his claws. Realising she was tricked Jane proceeded to scream for help and her sister ran to her rescue but when she got there Spring-Heeled Jack disappeared. It was the most ridiculous attack heard thus far and they now compared Spring-Heeled Jack to the devil.

Many theories occurred about who Spring Heeled-Jack actually was. Some people suspected that Spring-Heeled Jack was a gentleman dressing up to scare people to win a bet, others suspected it was actually more than one man playing these weird pranks on women all across London. He was only known for frightening women but in the 1840’s Jack was accused of murdering a prostitute. After arresting and questioning several men, they still could not catch him so no one was ever charged for the murder or could prove that Jack was the killer. Many believed the 3rd Marquess of Waterford as Spring-Heeled Jack because of his known drunken antics that got him the nickname “Mad Marquess” . A young boy came forward with information that he saw Jack with a W crest on his costume which made many people believe it stood for Waterford. Waterford died in 1859, yet more attacks were still taking place, making the theory of Spring-Heeled Jack being several men believable. In 1870 The Army set traps to catch Jack and people who thought to have seen him would shoot at him but Jack could never be caught or killed. He was last seen in 1904 in Liverpool reportedly leaping from several rooftops and never seen again. Spring-Heeled Jack was later featured in fiction stories, plays and comic novels. Spring-Heeled Jack legend whether he was Nonfiction or Fiction still lives on today.

Other References for Research:
Monster Wiki, https://monster.fandom.com/wiki/Spring-heeled_Jack , gives information about the
plays and novels written about Spring-Heeled Jack.