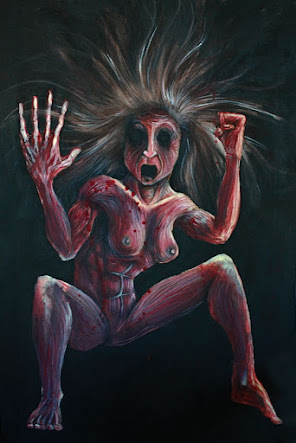 Veronica Byrd told an interesting story about a young man who suspected that his beautiful wife might be a BooHag. While BooHags are considered an urban legend they are real to the Gullah culture as creatures that are similar to vampires who feed on the unsuspecting and vulnerable people nearby. In this story the young man named Emmet was looking for love when he found a beautiful woman to marry. People around town were warning him that she was strange and he needed to stay away from her. He married her anyway. After their marriage he started to notice on certain nights at midnight his wife was nowhere to be found. He got worried and thought she was seeing someone else. He ranted to his friend about what was going on and his friend told him that she might be a BooHag. One night he looked in the closet and saw his wife’s skin hanging up. He put salt and pepper inside her skin. When his wife returned that night, he saw her skinless. When she put her skin on it was burning her alive and she eventually died. Although BooHags are dangerous, widespread and unnatural they have a rich history and there are ways to repel and protect against them.

Robin Jarvis explains the legend of Gullah culture and the origin of the BooHag. He states that, “The seas Islands and the Coastal plains of the Southern Coast of South Carolina are home to a culture rich in African Heritage.” The heritage site is called “Gullah” after the creole language spoken there. The Gullah people along South Carolina’s coast have a culture all their own. Their culture is well-respected by other South Carolinians. Part of their culture involves the legendary tale known as “Folklore” of the BooHag. The Gullah people believed that if a person did not make it into heaven they became a BooHag instead of going to Hell.

Author, Kyle Van Helsing gives information about what a BooHag does. He states, “A BooHag is a vampire-like creature. It’s similar to the vampire of Central and Eastern European folklore. The BooHag sits on the chest of their victim while “riding” them.” BooHags steal their victim’s breath while they are sleeping and they wake up tired. BooHags live in abandoned houses that are deep within the swamps of South Carolina. The BooHag’s appearance is difficult to miss as the BooHag has no skin to call its own. He states that, “Since the BooHag has no skin, its muscles, tendons, and arteries are exposed.” This is why the BooHag steals the skin from victims who struggle to fight with them during the attack. They eventually kill the victim and wear the skin as its own. During the day, the Hag appears to be a young and beautiful lady. At night the Hag removes its skin and takes off into the night sky to look for victims.”

Sloane Frederick provides information about how to get rid of a BooHag and Shannon Scott provides another way. Sloane explains that getting rid of a BooHag requires you to use a broom because it will attach itself to the broom once it jumps out of its victim. Then it can be swept out the door. Shannon explains how some Gullah people practiced voodoo to rid themselves and others of BooHags. The Gullah used paint called the “Haint blue” paint because it kept the haints  away.” Haint was another word for an evil spirit or BooHag.

BooHags have been around for years as they find their roots in Gullah culture. They are a myth but many people recognize them as being real. They are the source of many superstitions and there are ways to protect and defend against them. Always keep a broom near and be educated on what they are.

Robin Jarvis. “The Creepy South Carolina Legend That Will Keep You Awake At Night.” Only In
Your State. May 2018. https://www.onlyinyourstate.com/south-carolina/gullah-culture-boo-
hags-sc/. Accessed 18 Oct. 2021