The Necessity of Bodysnatching

The origin of body snatching was for medical practice and art, but the underground black market of resurrectionist grew directly from the demand for bodies by medical curiosity. As Body Snatching around the World | History Detectives by PBS put it, body snatching was “condoned by many medical practitioners and institutions who believed it was a necessary evil” throughout most culture and most of history before legal anatomical study of the body. The article goes into detail about the first believed body snatching for medical use in 1319 by a anatomy professor at Bologna, Mundinus. From that point on medical professionals and artist began to dissect the body for review more frequently in histry. 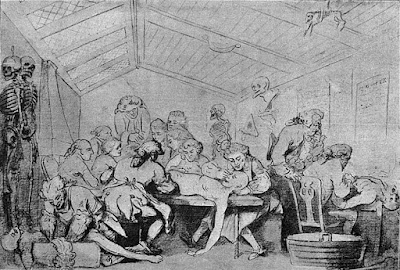 By Rowlandson
The Italian Boy: A Tale of Murder and Body Snatching in 1830s London by Coates, Isabel is an article on the murders of orphans due to resurrection men, while additionally on the trial of anatomy murderers and the history of ending the practice of burking. Burking meaning to murder by suffocation, leaving no marks of violence which was the practice of resurrection men. The burking of victims by resurrection men was called autonomy murders as for they were to supply the demand by medical professionals for fresh bodies to dissect. The anatomy murders were the final straw for the public on bodysnatching. The murder of an orphan boy caused three resurrection men to be put on trial for murders in 1831. This trail was the first of many that influenced laws that hindered resurrection men's autonomy murder. Anatomy murders occurred internationally in result of the demand for fresh dead bodies for dissection in the medical world but was majoritively during peaks in medical advancements throughout history.
Throughout history bodysnatching was very common in most cultures that advanced in medicine and the arts until the late 1800s and 1900s when it became restricted by laws. The Begin Cutting by Telhan, Gaurav Raj is an article on the recollection of the author’s medical career experience dissecting human cadavers and the necessity it was to their medical education. Morally and ethically debating the value of the knowledge versus the actuality of cutting dead bodies. The impact body snatching had on the medical community is why it was morally accepted by the surgeons who bought bodies at the time. The purpose of body snatching was to advance the medical world to the point humans could reach voluntary dissection and body/organ donation.