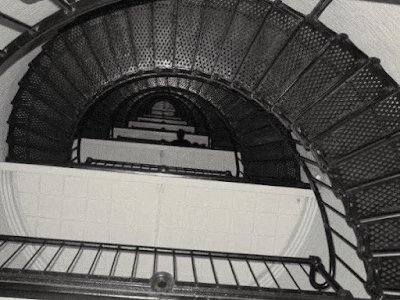 Imagine catching what appears to be a silhouette of
someone peering down from two staircases above.
This sighting has become more common than
others when touring the lighthouse.

Spooky Season has arrived at long last, and Halloween is just around the corner. It’s the perfect
time to indulge in candy and other traditions that accompany this holiday, and those who are
interested in everything paranormal are in for a treat if they’re willing to take their chance and
explore. The St. Augustine Lighthouse in Florida is one of the oldest points of navigation in U.S.
history. The lighthouse that stands today is the second one and was constructed in the late 1700s when the first collapsed due to erosion. It has also stood tall and proud through many battles during its time. Still, there is more to this lighthouse than what initially meets the eye. Its history is tainted with death, and to this day spirits remain tethered to it, having been unable to move on for centuries. One of St. Augustine’s most famous ghost stories begins with Hezekiah Pittee, who was the superintendent of the second lighthouse construction. Kelcie Lloyd, the Special Programs Manager at St. Augustine Lighthouse, explains this tragic tale in her article titled Ghost Stories: The Pittee Girls. He had four children named Mary, Eliza, Edward, and Carrie. They utilized the construction site as one giant playground and favored a supply cart that ran from the site to the dock where supply ships would wait. Little did they know that supply cart would carry them to a watery grave. The only thing preventing them from tumbling into the water at the time was a wooden board. On the day of July 28, 1873, the Pittee siblings and an unidentified African American girl were on their makeshift rollercoaster, and as it turns out, that wooden board was no longer secured in place to stop the cart. So, it tipped over and into the water. The girls were trapped beneath it, and by the time a worker raced to remove it, three of the four girls had drowned. Carrie, the youngest, was the only survivor.

The Pittee family, originally from Maine, moved back to their home to bury their loved ones there,
and the resting place of the unidentified African American girl has yet to be discovered.

This video follows Buzzfeed Unsolved co-hosts
Shane Madej and Ryan Bergara as they visit
the St. Augustine Lighthouse after hours to
provide viewers a ghostly experience

Many years have passed since this tragic incident, but that was not the last the world would ever
see of these children. Not to mention, there were more who had died here. Some of these
individuals include William Harn, Peter Rasmussen, and Joseph Andreu, who have supposedly
been sighted around the lighthouse and the keeper’s house below it. Rasmussen’s spirit is easily
identified through reports of the scent of cigar smoke. Andreu met his end after falling off the
lighthouse when painting it during its construction. Harn was one of the first keepers of the
lighthouse, and unfortunately the first to die in it after a long battle with malaria and tuberculosis.
Many strange occurrences have happened since then, with staff members and tourists reporting
ghostly encounters. There have been reports of footsteps being heard upstairs, with no one present upon investigation, as well as sightings of little girls standing and disappearing not a second later. Staff and tourists have also noted the smell of cigar smoke, doors being left wide open despite having been locked the night before, EMF readings, the sound of music boxes playing, and more. The St. Augustine Lighthouse is a favorite among tourists intrigued by the unexplainable and has even been featured on an episode of SyFy’s own Ghost Hunters. It seems safe to say that human beings absolutely must have an explanation for things, and the paranormal refuses to provide one, which surely contributes to the lack of belief in them. However, some answers must be sought after, and perhaps a ghost tour of the lighthouse would be a good place to start.

Links for further research
1. The Ghosts of the St. Augustine Lighthouse
https://ghostcitytours.com/st-augustine/haunted-places/st-augustine-lighthouse/
An article providing an overview of the ghosts that inhabit the St. Augustine Lgihthouse
2. The St. Augustine Light
https://en.wikipedia.org/wiki/St._Augustine_Light
A Wikipedia article that provides the history of the entire lighthouse as well as more
resources for further research.
3. staugustinelighthouse.org home page
https://www.staugustinelighthouse.org/
The official lighthouse webpage itself. It offers information on the lighthouse and its
history, as well as how to set up tours.