The illuminati itself is a source of many great conspiracies. The illuminati was a secret
society, first meeting in May of 1776, founded by Adam Weishaupt. Weinshaupt was a professor at a university; he was involved in a private group within a Catholic church. While he was a leader in the group, he found the best method to keep control was to keep secrets. Weinshaupt formed a secret society to manipulate the members. The people did anything to learn the secrets, whether they were real or fake. I believe this may have been the start of all the conspiracies formed throughout the years. The group's goals were to limit religious influence and power by the government on society. The group chose not to discuss or worship religion together as a symbol of freedom to each member. Many of the group's rules and virtues were based on the Enlightenment ideas of the time period.

As time went on, the illuminati began to slowly fall apart. Almost a decade after the first
meeting, the Bavarian government shut down the secret society and banished Weishaupt to Gotha,
Germany. There are many present-day organizations that claim the name “illuminati.” Although
there is no evidence to link these groups to the illuminati, it is the only current connection we have
to the illuminati. Originally the illuminati was never meant to be noticed, but when people found
out they began to create ideas and conspiracies about what the illuminati really was. 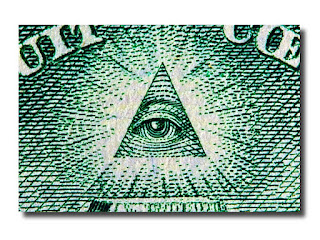 Many common conspiracies are formed around the common symbol of the eye. The Eye of Providence is a symbol that has been the start of many conspiracies. The eye inside a triangle on the one-dollar bill is known to connect the European and US government and the passages of power (Hunt). The eye also shows up on some versions of the Bible; one example of this, as explained by John Hunt in “Secrets of the Illuminati: The Top- Secret Society With Plans to Rule the World,” the Catholic Bible was
used by Joe Biden on Inauguration Day. Some people tend to think the swearing in of Biden means
the illuminati is planning to overrun the governments by using such celebrities as Biden, Lady
Gaga, and Eminem.

Over the years many facts about the illuminati have been proven true. There are also many
unproven conspiracies and theories. Most people can agree it has become a discussion over what is
facts or fiction. No matter what you believe about the illuminati, it is a fact that it once existed in
some society in the past.

Present Day Illuminati
https://www.theweek.co.uk/62399/what-is-the-illuminati-and-what-does-it-control
The article discusses more on present day illuminati and how it involves celebrities. It also goes
back into the illuminati in the early years.

Illuminati in Government
https://time.com/5892376/early-american-conspiracy-theory/
Time.com discusses the conspiracies and beliefs of how the illuminati has impacted the
government with President Trump and evangelistic Christians