The Flannan Isles Lighthouse  is a 75 feet lighthouse that was designed by David Alan Stevenson for the Northern Lighthouse Board. The island is part of the Flannan Isles in the Outer Hebrides off the west coast of mainland Scotland. The lighthouse is on the highest point top of the island, Eilean Mor.
The area is best known for the mysterious disappearance of the light keepers in 1900. According
to an article published on ASPire, entitled “When Three Isn’t a Crowd: The Mystery of Eilean
Mor” the origins of the lighthouse of Flannan Isles holds a supernatural present. The supranatural
element is seen in the island bad reputation for many centuries. The Flannan Isles Lighthouse has
been permanently deserted for over a thousand years, since the time of St Flannan and his Celtic
flock first owed the place. The original habitants of the island, the shepherds, sometimes brought
their sheep across to graze on the island for that day. The shepherds would never stay the night
as they feared “the spirits they believed lived on the island.” The strong supernatural history of
the island let to more of a connection to theories and conspiracies of the mysterious
disappearance of the light keepers than a usual mystery. 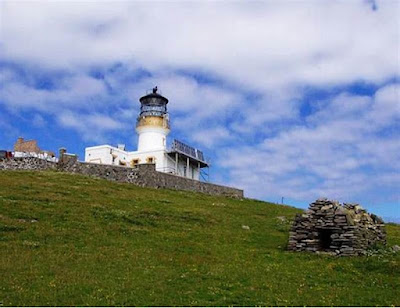 The first record that something was abnormal on the Flannan Isles was on December 15,
1900. The steamer Archtor, on a passage from Philadelphia to Leith, is directed to the Flannan
Isles due to the poor weather conditions in the area. There were no lights from the lighthouse that
help lead the boat to the island. When the Archtor docked in Leith on December 18, 1900. The
crew reported the strange incident to the Northern Lighthouse Board. The lighthouse was
manned by three men: James Ducat, Thomas Marshall, and Donald McArthur, with a rotating
fourth man (Joseph Moore) spending time on shore. 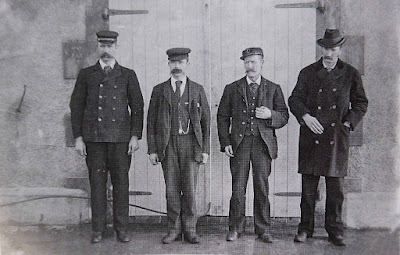 Flannan Isles lighthouse keepers: James Ducat, Thomas Marshall, and Donald
McArthur, with a rotating fourth man (Joseph Moore) spending time on shore.
The sighting of the Archtor was passed onto the Northern Lighthouse Board to
investigative the situation. The relief vessel, the lighthouse tender Hesperus, was send to the
Flannan Isles Lighthouse to investigative the three lightkeepers disappearance. The relief vessel
was unable to sail from Breasclete to Lewis, as planned on December 20, 1900 due to poor
weather in the area. Jim Harvie, the captain of Hesperus, attempted to reach the lighthouse
keepers by blowing the ship's whistle and firing a flare, but was unsuccessful. The Hesperus
didn’t reach the island until December 26, 1990. The arrival of the ship shows no signs of the
lightkeepers to be found. When the crew reached the shore, all that could be found of the three
lightkeepers were evidence of the thunderstorm. According to a website posted on Northern
Lighthouse Board, entitled “Flannan Isles” the evidence of the thunderstorm is found on the
West side of the island where a broken box at 108 feet above sea level that had its contents
spread out. The contents spread out include “West landing mooring ropes and tackle...ropes it
appears, got washed out of it, they lie strewn on the rocks near the crane”. The other evidence of
the thunderstorm comes from the iron railings bent over, the iron railway by the path was
wrenched out of its concrete, and a rock weighing more than a ton had been displaced. This
information further put into question how the evidence relates to the three lighthouse keepers'
disappearance.

Proquest
https://www.proquest.com/historical-newspapers/article-6-no-title/docview/109116257/se-
2?accountid=25998
The newspaper article is about explaining the history of the three lighthouse keepers’
disappearance that contribute to the making opera production of, “The Lighthouse”. This article
shows a perception of what real life evidence expired the tales of the events in the Flannan Isles
lighthouse disappearance.

Atlas Obscura
Flannan Isle Lighthouse – Outer Hebrides, Scotland - Atlas Obscura
The website is about explaining the history of the three lighthouse keepers' disappearance
that contribute to the making of the theories of the true event. The website uses the history and
supernatural elements of the disappearance of the three lighthouse keepers on Flannan Isles for
an increase of tourism in this area.