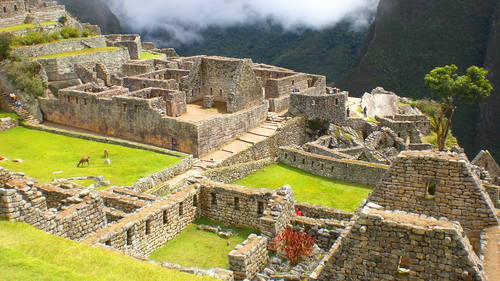 The Peruvian city, Machu Picchu, was discovered 100 years ago. It was first built in 1450 and then completed in 1460. Also, Machu Picchu is a historic establishment for the Inca Emperor. It was made of heavy granite stones and it is extremely hard to cut even with today’s technology. The city of Machu Picchu is in the midst of a landscape of mountains. It was built to withstand earthquakes that would rattle the town situated on top of two fault lines. In 1911, Hiram Bingham and his fellow crew rediscovered Machu Picchu. The Incas never wanted it to be discovered though. According to skeletal remains, majority of the people who lived there were immigrants from very different backgrounds. They lacked the chemical markers they would have if they had been living there their entire lives. Instead, there was bone damage to different areas of Peru from various species of water parasites. At Machu Picchu the skeletal remains found are unique in their level of natural bone damage from laborious activities. The levels of arthritis and bone fractures differ at Machu Picchu than at the Inca Empire. Most people at Machu Picchu, their levels of arthritis and bone fractures are low. The interesting thing about this is that there the total amounts of skeletons were 135. Bingham took many archaeological findings. Among those archaeological findings there were pottery, jewelry, and human bones. Bingham believed that most of the skeletons he found was 75% females and the other 25% percent were males. 109 skeletons were from females and the last few were from males. The exposed bones do not belong to royal burials, but it is known for belonging to those living and working in the retreat of the emperor at the time when Machu Picchu was abandoned. The abandonment of Machu Picchu was in 1572. Unfortunately, their line of rulers came to an end.

According to the National Geographic, it states, “Machu Picchu is a testament to the power and ingenuity of the Inca empire. Built without the use of mortar, metal tools, or the wheel, Machu Picchu stands as an archaeological wonder of the ancient world” and I find it very interesting that no mortar was used in order to make it steady.