El Dorado a European myth, known has the lost city of gold. Some say that El Dorado is a person who would cover himself from head to toe in his own gold.But then it’s a place, where the gold is hidden. Throughout centuries El Dorado has been mentioned, searched for, and also has been lost for many years without people finding. Why does anyone want to find this place and what is the big deal? People to this day will still look for this, but why. El Dorado reveals the true nature of the territory and people for has lived here.

In deep South America, the origins of El Dorado lie. Legends have lied for centuries and contains some scarps of the truth. In the Andes Mountain tribes have landed, and hid there for over thousands of years to hide the “Lost City of Gold." 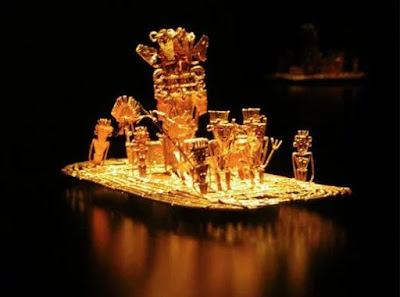 El Doradohad a tribe coming to look for all the gold in the lost city, the musica “The Musica is a practiced ritual for every new appointed king that involved gold dust and other precious treasures.”When a leader is appointed then he can stat to take his duties as a king. The rulers of the Musica would wear a head piece to show that they are the leaders. The Musica was meant for the “Gilded One”but has become synonymic with the lost city of gold.

Suppurations have said that El Dorado is not just a lost place but a person. El Dorado would cover himself in gold from head to toe. El Dorado was known as the “Golden One.” He was the leader of the tribe and would be the person that would lead and show everyone where to go.

So my question to you, what do you believe a place or person?Maybe a person that made a change in the world that people named a place. Well hard to tell, but someone wanted to hide gold and treasures for who to find. El Dorado, what is it?

Calhoun, Cynthia. "What is the legend of El Dorado and the gold of the Chibchas?" Owl Cation, 3 May 2018. chibchas-the-and-dorado-el-of-https://owlcation.com/humanities/legend

Gordan, David. “The Musica Raft: A Golden Statue discovered in a cave near Bogota may be the key behind the myth of El Dorado”.The Vintage News, https://www.thevintagenews.com/2017/04/23/the-muisca-raft-a-golden-statue-discovered-in-a-cave-near-bogota-may-be-the-key-behind-the-myth-of-el-dorado/,23 April 2017.