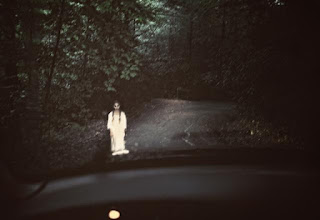 The photo above might seem a little weird to some. It is a picture provide to the viewers to see the vanishing hitchhikers.  Vanishing Hitchhikers is either a myth or a legend. If you are confused as to what a myth or a legend is, you can visit this website to learn more. http://myths.e2bn.org/teachers/info311-what-are-myths-legends-and-folktales.html After reading this website’s blog, readers can than make an opinion on what they believe. Vanishing Hitchhikers have been dated all the way back to the 20th century, but goes back much later.  The reason this story is told so much today is because humans have reported actually seeing vanishing hitchhikers in real life. A vanishing hitchhiker is someone who calmly gets in the car with others after being offered a ride. After a little while of riding, or coming to the spot that the hitchhikers needs to go. The hitchhikers than just disappear without warning or without any signs. It has been said that some hitchhikers leave a garment that they are wearing, or a tissue that they had when they got in.  It is said, that the very first hitchhiker was the Apostle Philip (Myths and Legends).  In the bible, (Acts 8:26-39) it tells readers about how an Ethiopian who was driving a chariot picks up Peter; the Apostle baptizes him and then disappears (Myths and Legends).

While there are countless stories that have been reported about Vanishing Hitchhikers. The most common story that is told is the story about a girl named Mary. This story is called Resurrection Mary. The first time she was seen was in 1930. She was spotted in Chicago. On the Archer Avenue road.  People have said they have seen her around there, while others have said to have seen her around the ballroom, or near the graveyard in Chicago; the one she was buried at. But who is she and how did she become vanishing hitchhiker. It is said, that one night a young girl was out with her boyfriend at the ballroom. As the night got longer Mary and her boyfriend got into an argument. Mary decided to walk home, because she would rather face the cold, then have to spend another second with her boyfriend. As she was walking home in the dark, she was hit and killed by a driver on Avenue road. The driver of the vehicle fled the scene. Mary’s parents buried her in the resurrection cemetery. Many believe that she returning from the dead to have one last dance with her boyfriend. While others believe that she is returning to gain revenge on her killer. While there could be many reasons as to why she returns.  All the witnesses that have seen her can agree on one thing. SHE’S REAL!!!!!!!!

Further Research:
https://www.youtube.com/watch?v=7NR0wZu7_b8
The link above is a video that was posted to give viewers a short and brief summary about Resurrection Mary.
https://www.youtube.com/watch?v=t3ejU0ZXWWg
The link above is another video that provides viewers a story about the vanishing hitchhikers.
https://books.google.com/books?id=eY-W_LiKe18C&source=gbs_navlinks_s
The link above provides readers with a better understanding of myths and legends.
Posted by Dr.Ms.Amanda at 4:27 PM