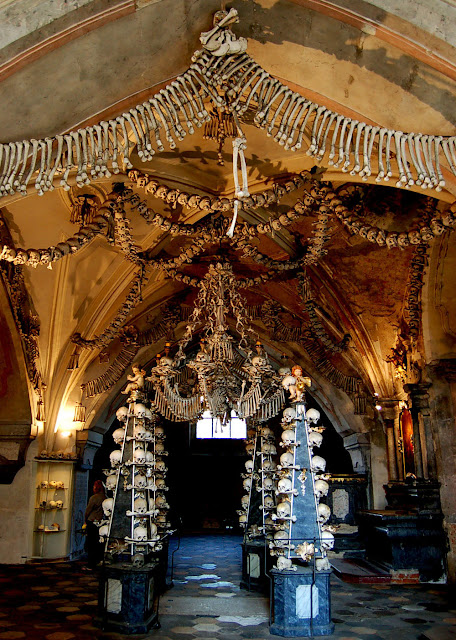 Historians and Anthropologists have made it clear that there are Seven Wonders of the World. However, they may be wrong. The following image above can clarify that this should also be apart of the Seven Wonders. Turning The Seven Wonders of the World into, “The Eight Wonders of the World.” The Macabre Bone Church also known as, The Sedlec Ossuary, is an old burial ground in the quiet town of Kutna Hora, in the heart of Czech Republic. Dating back to 1278, King Otakar II of Czech Republic, ordered Abbot, a blind monk, to handcraft this ossuary to store the remains of humans in this old chapel. King Otakar II sent Abbot to Jerusalem to obtain soil from the Golgotha, known as, “Holy Soil” to bless the Ossuary. When news got out about this, many people wanted to be buried here as well, thus making it the most religious burial site in Europe. When the Bubonic plague reached Kutna Hora, it massacred over 30,000 citizens, making the Ossuary home to over 40,000 human remains. This ossuary is meant to be seen as a fascinating site and remotely strange due to human remains being instilled in this ossuary. By the fifteenth century, the community began to construct the Gothic Church. Later, many bones were removed and stacked into a pyramid-shaped in the ossuary beneath the new building. However, the construction was placed on hold until the 1870s when the Gothic Church hired a local woodcarver, Francis Rint, to create something magnificent, yet ghoulish look for the future tourist to always remember. Rint bleached each bone and used it to decorate the holy space. Creating chains of skulls to stretch across the entryways so tourist can feast their eyes on the three-hundred-year-old remains. Chalices and crosses were constructed from human femurs and hips. 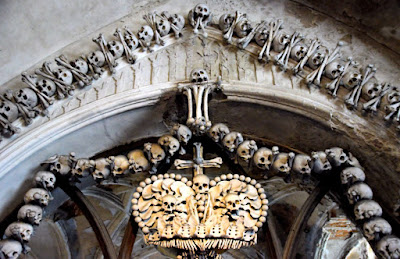 One of the many iconic decorations in the Ossuary is, the Swarchenzbarg coat of arms. Made up of pelvises, skeletal fingers, skull bones, and skeletal arms. A crow made of bones was crafted to be poking out the eye of a skull. This coat of arms is designed to dedicate the Noble German family. ‘Road Unraveled’ investigated and toured the Ossuary, and also said it to be, “signs of trauma that was likely incurred during a war. It’s startling, creepy, and beautiful all at once.” 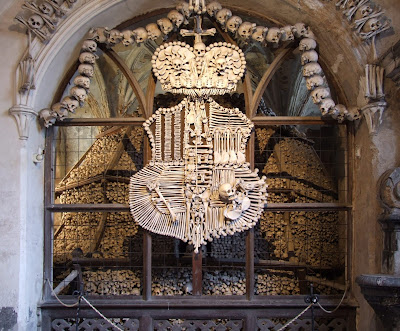 Link for further research:
http://www.outsideprague.com/kutna_hora/bone_church.html
The link above gives a brief description to the Sedlec Ossuary and presents a video of it as well. Also, Stories of hauntings occurring.

https://www.youtube.com/watch?v=6wMyv-JOWb8
The link above is a video of the Sedlec Ossuary visited by some tourist. Each scene captures a portion of the Ossuary and shows the decorations inside.

https://www.timetravelturtle.com/sedlec-ossuary-bone-church-kutna-hora-czech-republic/
The link above is a historical summary of the Sedlec Ossuary from 1278 until present time.