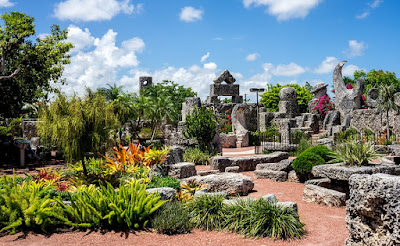 The Coral Castle has been in Homestead, Florida since he moved it in 1936. It took Edward Leedskalnin about 28 years to build this castle completely out of rock. Leedskalnin was about to marry his girlfriend Agnes, who he called his sweet sixteen, because she was sixteen at the time. He started building his rock castle in 1920 to show his love for Agnes after she called off the wedding. The structure is built completely out of oolite limestone  . Leedskalnin had no real building or lifting tools, just his hands and a carving tool for the rock. Since the beginning Leedskalnin has used the coral castle as a way to make money by charging people to come and see his progress. During the night he would crave the rocks and set them and then in the morning he would allow people to come in and see what he had done. Leedskalnin used his personal strength along with his knowledge of magnetic current to build the castle. He even wrote short books about magnetic current. Even though most scientist say that his finding are not right, it is still cool.

No one could believe that Leedskalnin a man who was 5ft tall and weighed 100 pounds could build that castle by himself. To our amazement he did, not only did he build it but in 1936 he moved the entire structure. He did get a mover truck, however he insisted that the driver leave the truck overnight so that he could load the rocks himself. The mystery is how he did it with no help or lifting tools. Leedskalnin was a very secretive man who did not share his method with anyone, only moving and carving the rocks at night. There are several theories on how he could have done it, although none have ever been proven or tested. They are just speculations made by people and scientist. That was until Wally Wallington decided to build a replica in his back yard using only himself and gravity. His techniques look so simple, but no one had really thought of it as a way.


Leedskalnin was very smart and intuitive for his time. He was originally from Latvia a country that earned their independence from Russia in 2004 and became apart on NATO not long after; he was a self-taught engineer and sculptor who built one of Americas many amazing structures. In 1951, leedskalnin died from tuberculosis, although he is gone his work still lives today. Hundreds of people go to see the castle, there is a tour guide there who has been studying leedskalnin for years and is fascinated   with his work and theory's as well. Most people would not think that a man of his way would be able to pull something as amazing as this off, but he did.

Mike, "What is Oolitic Limestone" Everything Dinosaur 8 June 2015 https://blog.everythingdinosaur.co.uk/blog/_archives/2015/06/08/what-is-oolitic-limestone.html

http://ezproxy.usca.edu:2048/login?url=http://search.ebscohost.com/login.aspx?direct=true&db=aph&AN=86695678&site=ehost-live&scope=site
The link above is to an article about theory's people said about how Leedskalnin was able to move the rocks.

http://www.thebohemianblog.com/2014/12/the-coral-castle-masonic-mystery-in-the-sunshine-state.html
The article above give a better look andinteresting facts about the guy who built it, Edward Leedskalnin.

https://latvia.eu/
This is a website made by his home country. They have pictures, information on their traditions and culture, history and landmarks.
Posted by Dr.Ms.Amanda at 6:24 AM