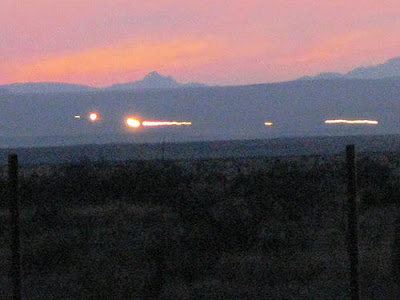 The Marfa Lights are a phenomenon that occurs very often in Marfa, Texas that baffles locals and lures in tourists from all over the nation. These are lights that appear during the evening and night, specks of lights that litter the desert skies varying from blue to red to yellow and often dart around the sky or split into various other lights. The locals have grown used to these lights, however many still speculate what they are. There are many theories, from the classic extraterrestrial related UFO, ghost lights, Native American spirits, and many other supernatural explanations. For example, Deborah Byrd explains in this article a popular theory- will-o-the-wisps. A “will-o-the-wisps,” otherwise referred to as ghost lights, derived from English folklore and are mostly seen in the English bogs, however that the term is related to these phantom lights that are unexplained. These lights were believed to have been a lantern or torch being held by a fairy or spirit, to lure travelers into foreign territory deeper into the bogs (Byrd). Byrd even goes as far as to mention the Marfa lights, explaining the darting of the lights and the fact that these lights appeared far before any cars were created, negating skeptics of the supernatural.

With the supernatural, comes scientific counter explanation, Marc Lallanila explains in THIS (https://www.livescience.com/37579-what-are-marfa-lights-texas.html) article the scientific side that may shed light, elaborating that it could be the highway to headlight superior mirage. This theory claims that the desert heat causes visible gases that may reflect the headlights of cars traveling on the highways to and through Marfa. It could also be the theory of glowing gasses that appear in the desert heat. Regardless of these explanations, it doesn’t stop tour guides from profiting of the national attention it brings, being the highlight of Marfa (Lallanila).

These scientific perspectives, however, counteract the history of the lights, dating back all the way to the early 1800’s as the first documented sighting, and Native Americans believing the lights were the presence of spirits of fellow tribe members. Michael Hall points out in his Texas Monthly article that there are two versions of the lights: the real version, or the unexplained version that many locals can attest to, and the fake version, the hoaxes possibly created by locals to continue tourist revenue. He states that real version may be references in World War 2 Air force sightings as well as the Native Americans lore involving the spirits of the deceased that is related to these sightings (Hall).

Either way, the lights have been a mystery that can be seen often in Marfa, locals love talking, and tourists love venturing out to witness these lights and make their own judgement on what may be behind them. So much culture derived from this phenomenon that there is an annual festival in Marfa involving music, food, and activities all leading up to a mass viewing of the lights, waiting for there appearance! Many will continue to speculate the supernatural, many will continue to attempt debunking with scientific theory, however no one knows for certain what these lights are, and the mystery of it all keeps locals and tourists excited for the next sighting! 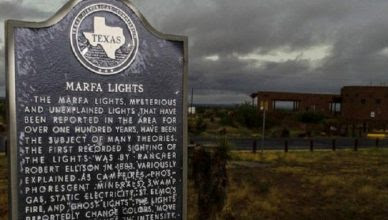 Byrd, Deborah. “Ghost Lights: Believe If You Dare.” EarthSky: An Update on Your Cosmos
And World.  29 October 2016.

Hall, Michael. “The Truth is Out There.” Texas Monthly. June 2006. https://www.texasmonthly.com/articles/the-truth-is-out-there/.

For more information on The Marfa Lights, visit these websites:

https://mythology.net/mythical-creatures/will-o-the-wisp/. Professor Geller goes into detail on the story behind “will-o-the-wisps,” being inspired by blacksmith named Will whose mischievous soul was sent back onto earth by Saint Peter. That soul, which was condemned on Earth forever, impressed the devil into gifting Will coal on Winter nights which he then used as a lantern to deter and lure travelers during their journeys. The purpose of this article is to go into depth of the lore behind what a will-o-the-wisps is and why it is seemingly a malevolent spirit.

https://www.ufoinsight.com/the-far-reaching-mystery-of-the-marfa-lights/ Marcus Lowth briefs on the existence, history and firsthand account of the Marfa Lights as many of the other articles, however, goes in depth in a particular crossing of U.S. and Mexican military in the Chihuahuan Desert Incident. This report claims of a UFO colliding with a small plane in El Paso and the small plane is referred to as a possible Marfa Light. The entire exchange resulted in the rumor of a captured UFO/ disk. The purpose of the article is to elaborate on the Marfa Lights, particular accounts, and the extraterrestrial side of the phenomenon.

https://earthsky.org/human-world/ghost-lights-believe-in-them-if-you-dare. Deborah Byrd goes into explicit detail in “Ghost Lights in History” on what a Ghost Light is by referring to English folklore and its second name of will-o-the-wisps. She explains that the spirits that some thought the lights were, would retract upon approach, and that they were also looked at as a torch or light carried by a fairy. The purpose of this article is to elaborate on what a Ghost Light is, its history and many popular modern sights for these lights, such as Marfa, Texas and the Brown Mountains of North Carolina.