Do you believe in a true ghost? After my research I now truly believe that Resurrection Mary is an alive ghost. To being her story, she lives in Chicago, Illinois in front of a catholic cemetery named RESURRECTION CEMETERY. No one knows who this beautiful girl is but people know how she died. Her death was horrible and painful, walking home from a dance at what is now O’Henry Ballroom. When she was hit by a car and left on the side of the road to die. As a ghost her appearance is so real like, she has long blonde hair and a white dress that has a yellow tint to it. People say that she is so warm, but cold to the touch (Kaczmarek). 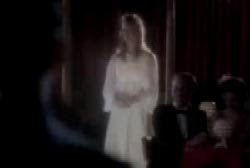 Some of the first encounter of her documented is in the late 1930s. The story is that she was dancing in the middle of the road when a man pulled over to ask if she needed a ride. She got into the car and said she needed to go to Anchor Avenue. A soon as the man pulled onto the street, he turned to the right and she was gone. She could not have jumped out! The car was going forty miles per hour and he would have noticed the door opening. At the beginning of the night was that she was in the ballroom. She was seen dancing with a man and spent the whole night with him on the dance floor.  When the night came to an end they we’re seen walking out together when she disappeared.
This story has an amazing twist. No one knows who Mary was in her human life (Chicago Quirk). Some have guesses but there is always something that does not match up with the ghost like appearance, death time, and other things like that. Some think that she is the ghost of Mary Bregovy who died March 10, 1934, she was killed when a car she was in crashed into a structure (Johnson). But there is no reason she would be in a white dress, the family of Mrs.Bregovy was not in a white dress nor did she have blonde hair. Another possibility is that she may be the young bride, Mary Petkiewicz who died December 25, 1932 from a car crash (Johnson). However, no one has been able to prove who she was when she was alive, and I do not think anyone will be able too.


Resurrection Mary is in fact real and has been seen dancing in the middle of the road in front of Resurrection Cemetery at night and many people have had encounters with her (Barlow). So the question is out. Would you stop and take her to Anchor Avenue or will you continue driving?


Pairie Ghosts. Talks more about her past and how she died.
http://www.prairieghosts.com/whomary.html
Haunted Detectives. This website gives you all the information, the legend, eyewittnesscounts  and other sources.
http://www.hauntdetective.com/index.php?option=com_content&view=article&id=53:resurrection-mary&catid=37:westside&Itemid=63


Grave Yards. Tells more about the actual cemetery and its history with Mary.
https://graveyards.com/IL/Cook/resurrection/mary.html