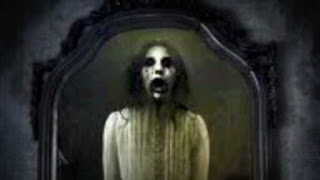 “If you look in a looking glass for too long, you are sure to see the devil” according to a nineteenth century saying. There was a superstition that started in the eighteenth century saying that mirrors were to be kept covered or faced towards the wall. It was said that if a mirror was not covered, it was an invitation for the ghostly and dead to appear. As centuries past there have been several stories and experiences people have had relating back to this superstition of ghost and mirrors. One of the most famous stories is the one about a women named Bloody Mary.

In the 1930’s many believed in the myth of Bloody Mary. They would play the game “bloody Mary”, they believed that if you walked into a room with a mirror, and the lights were out, and you say “bloody mary” 3xs, Mary would appear in the mirror. Historical rituals encouraged younger girls to walk up a flight of stairs backwards, while holding a candle they would see the face of their future husband. If the young women didn’t have a chance at marriage, and would die before they had the chance, they would see a glimpse of the bloody mary.

There are many different versions of who exactly Bloody Mary is. One version of the Bloody Mary goes back to the time before Queen Elizabeth I of England became queen. The story says that Queen Elizabeth I hadan older sister named Mary Tudor who was also the daughter of Henry VIII. Mary Tudor was said to be a Catholic and had many Protestants put to death by burning them at stake. By doing this, the name Bloody Mary was given to her. At this time Mary Tudorwas queen and wanted to produce the next heir. It was said that Mary had a very hard time conceiving. There were rumors saying that Mary eventually became pregnant but was pregnant with a ghost baby. Due to the fact Mary could not conceive a child, her sister Elizabeth was given the throne and soon after sentenced Mary to death. After her death everyone would say they would see Queen Mary in their mirrors.
Another version of who Bloody Mary is, is the story of the witch in the woods. At a point in time, little girls were starting to go missing and the witch was of course a suspect. No one had ever been to the witch’s home before, but when they went she was more beautiful than anyone had imagined.
With any more questions asked, they left the young, beautiful girl alone. Then one night I little girl left her home in the middle of the night. While everyone was out, looking for the little girl they spotted a light in the middle of the woods. Everyone thought the light was the little girl, then once they got closer they seen it was the witch. She tried to run, but they caught her and burnt her in a barn fire. While burning, it was said she was casting a spell on anyone who would chant her name in the mirror.

Further Research
http://americanfolklore.net/folklore/blood-mary-legends/
This link gives information about different versions of bloody mary. It gives more information about bloody mary rituals and what to do to make her appear.
http://www.castleofspirits.com/bloodymary.html
This link gets more in depth about the game. How it is a popular game at children’s sleepovers.

http://www.ghostsofohio.org/lore/ohio_lore_1.html
This link is about a team of investigators who investigate hauntings. They talk about how people actually believe in bloody mary, and ask that they do further research on it.

http://moviepilot.com/posts/2015/04/02/the-tragic-true-story-of-the-real-life-bloody-mary-2822134?lt_source=external,share_video
This link from Movie Pilot outlines the history of Bloody Mary and includes an informational video.
Posted by Dr.Ms.Amanda at 11:23 AM