The Forest of Suicide

The Forest of Suicide
Near the base of Mount Fuji lays the Aokigahara forest, which according to John on Tofugu.com, is “also known as the Sea of Trees, Suicide Forest, and Japan’s Demon Forest...”  John also mentions that “Aokigahara is the world’s second most popular place for suicide.”  Why would people come to this forest just to commit suicide?  Well, after researching Aokigahara, I have found that the forest became a suicide hot-spot soon after a novel called Kuroi Kaiju by Seicho Matsumoto was published.  In the novel Kuroi Kaiju, which means Black Sea of Trees, two lovers commit suicide in the forest of Aokigahara.  Many believe that this book sparked the suicide frenzy because according to Lauren Sesana this book along with The Complete Manual of Suicide   has been found with the remains of the bodies. However, there were also suicides that predated the novel.  During times of famine in Japan, people would leave family members in the Sea of Trees so they would have fewer mouths to feed (Sesana).  It sounds gruesome, but Aokigahara has the perfect topography if you want to get rid of someone.
Aokigahara is known to be very still and quiet. Sesana notes, “The vegetation is extremely dense; the numerous trees block out most of the light, even in the middle of the day.  The trees also block the wind, and there is little wildlife to be seen or heard.”  She continues, “Perhaps for this reason Aokigahara has been thought to be the realm of demons.”  The name “Japan’s Demon Forest” has been given to Aokigahara because according to John the spiritualists of Japan believe that the ground and vegetation have been infused by the suicides, which then causes paranormal activity.  It is said that spirits can be spotted by visitors shifting between trees (John) as seen in the picture below. 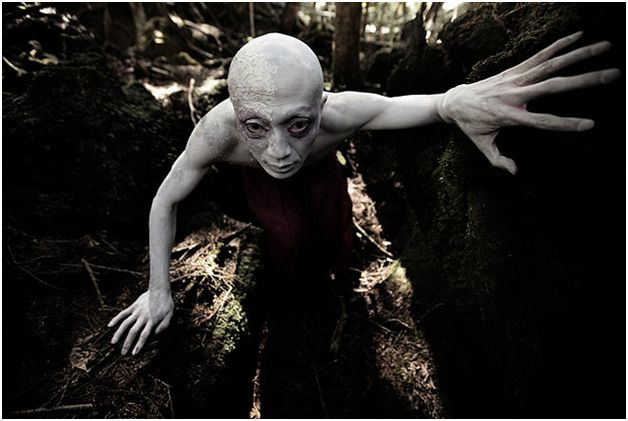 Aokigahara is a beautiful forest which has somewhat been corrupted by the mass suicides that occur in it.  The fact that demons are believed to live in the forest also makes the forest less appealing.  If someone doesn’t believe in demons, doesn’t mind seeing corpses, and has a good sense of direction, Aokigahara is a lovely place for sightseeing.

Links for Further Research:
The Washington Times Communities.
http://communities.washingtontimes.com/neighborhood/world-our-backyard/2012/aug/19/aokigahara-japans-suicide-forest/
This site contains information from what people write since it’s a social journalism site.

Tofogu.
http://www.tofugu.com/2012/07/23/aokigahara-japans-haunted-forest-of-death/
This website provides allot of information that was taken from other websites.