When I was little, many young girls liked to play games like “Bloody Mary”. The girls would stand in front of a mirror with the lights turned off repeating the name “Bloody Mary” over again. After you call Bloody Mary, she is supposed to appear in the mirror and claw your face, steal your soul, or just appear with blood all over. The game Bloody Mary has been played throughout time and there is no true story of Bloody Mary.  The legend has multiple stories to be told, and the game is played in different ways. The story of Bloody Mary ranges from history of a tyrannical queen, to myths of the witch in the woods, as well as, a drink for a recovering hangover. 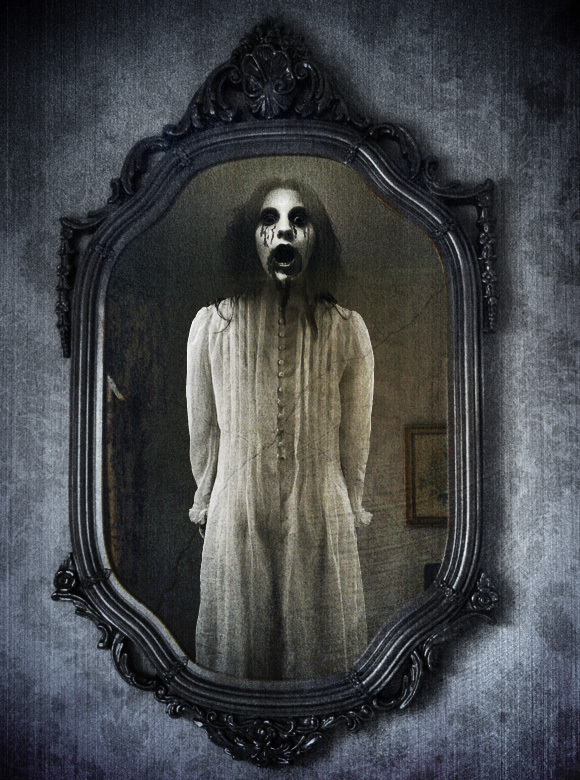 Written on American Folklore, There was a witch in the woods, by the name of Bloody Mary. No one went near her home, but when little girls started going missing, everyone was questioned in the village even the witch. When the townspeople went to the witch’s home to question her, but the people noticed she appeared younger and more beautiful. One day a little girl left her home in the middle of the night. The little girl’s parents tried to stop her, but the little girl kept going. Her parents started calling on the townspeople for help. The people saw a low glow light and ran towards it. The light was the witch holding a wand chanting a spell, but Bloody Mary ran as she seen the people yelling after her and one of the men shot her in the hip. The townspeople grabbed her and took her to a field where they had made a bonfire and threw her in it and as the witch burned she casted a spell on anyone that chanted her name in a mirror. The townspeople went to the witch’s home and found the graves of the missing girls in her backyard.
The tyrannical Queen Mary I, “Bloody Mary” started out being nothing but the same name. The Queen killed many people that tried to dethrone her. Many of the people killed were based on religious persecution. There are similar references connecting the Queen Mary I to the Elizabeth Bathory story. Elizabeth Bathory is known to be the “Blood Countess,” which she killed many young girls,  but still no one knows the story of the Legendary Bloody Mary. Neither of the stories connects to the legend of the lady standing in the mirror, clawing your face out.
There is a cocktail drink called “Bloody Mary,” that people drink occasionally. A bartender by the name of Fernand Petiot started out putting a twist to an already known drink called the “the Red Snapper.” When Petiot put the twist to the old cocktail it became the “Bloody Mary.” Fernand made this drink in the 1920’s working at a bar in Paris; he then brought the new refined drink to New York. It is said that the drink is known for drinking when one is attempting to sober up.
As stated before, I once played the game Bloody Mary, but I never followed through with the game. I have always been the scared one, so while writing this article I was scared to research this topic, or look at any pictures. I have never known anyone to see the infamous “Bloody Mary,” but this could be because this is a story you tell a slumber party of girls to scare them to sleep or dare them to be the courageous one. Bloody Mary Stories, Here is a few stories that real young girls have told about their Bloody Mary experience.

Queen “Bloody” Mary
http://www.greatsite.com/timeline-english-bible-history/queen-mary.html
There is information on Queen Mary I telling the story with details on her life.

Lady of Blood: Countess Bathory
http://www.trutv.com/library/crime/serial_killers/predators/bathory/countess_1.html
There is a website on crime stories and unsolved mysteries.