Mayan Prophecy: The End Is Here 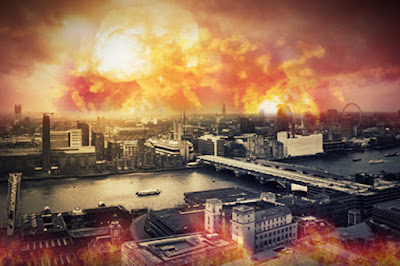 It is our last year on Earth! Don’t worry about what you eat, skip that day at the gym, go buy that dream car you have always wanted! The world is going to end December 21, 2012! Well... at least according the Mayans “Long Count” Calendar it is. This calendar is a cyclic calendar, which means the calendar starts a new cycle when one has ended. For the long count calendar, this cycle was named the “Grand Cycle.” This cycle is believed to last approximately 2,880,000 days long. With the start date being on August 11, 3114 BC, that would make the final day of the cycle land on December 21, 2012. Making many believe that the end of the cycle means the end of the world as we know it (“How Does the Mayan Calendar Work?.”)

There are many different theories of what will happen on this date. Some believe the world would end with a terrible natural disaster. Such as a worldwide earthquake, tidal wave, or a huge volcanic eruption. Others believe that the earth will collide with a “Planet X” causing magnetic poles to shift, reverse of gravitational pulls, or our entire solar system getting sucked into a giant black hole (December 21,2012). Since the “Grand Cycle” on the long count calendar ends on December 21,2012. This is the cause of many people believing that the Mayans predicted the end of the world.


According to Dr. John Carlson, Director of the Center for Archeoastronomy at NASA, the whole entire “Prophecy” is a misconception. The Mayan calendar does not end on December 21,2012, and there were no prophecies made by the Mayans about the end of the world. The Mayans were a flourishing civilization. They mastered astrology and created their own written language. Most impressive to Carlson was their expansive sense of time. To keep track of such long intervals of time the Mayans created the “Long Count” calendar, which is the most complex calendar system ever developed. The Mayan theologist believed the world was created August 11, 3114 BC. Making the start of the calendar look like “130000.” On December 21, 2012 the Mayan calendar would read the exact same way. By Mayan scholar terminology this time period passed is 13 “Bak’tuns.” Which is significant interval in Mayan theology, but not a destructive one. He says no artifacts found of the ancient Mayan civilization have anything leading to a prophecy of the end of the world (NASA).

Some believe that this year, the world will end in horrible fashion. Others say the world will not end, that it is all a misconception of information. Which side do you believe? Will the world really end on December 21, 2012? I guess we will all have to wait until the day comes to see for ourselves.

"How Does the Mayan Calendar Work?.” Timeanddate.com. https://www.timeanddate.com/calendar/mayan.html. Accessed on 26 March 2019.

Cartwright, Mark “Maya Architecture.” Ancient.eu, 20 Sep. 2015. https://www.ancient.eu/Maya_Architecture/. This web article written by history writer, Mark Cartwright, he explains the many different structures that the Mayans built, also their influences and materials they used to build. The Maya were aware of the mysterious Olmec civilization, and observed their ways especially at Teotihuacan, which was the largest, most influential, most revered city in the New World. The Mayans took this information and started creating their own unique structures. The Mayans used readily available materials to build such as limestone, sandstone, and volcanic tuff. The Mayans are most well known for their huge pyramids they built, such as Temple IV which was 65 meters high.

“Mayan Scientific Achievements.” History.com, 17 May. 2010. https://www.history.com/topics/ancient-americas/mayan-scientific-achievements. This article written by the editors of History.com, provides information about the Mayans accomplishments. The Mayans were far ahead of their time with the elaborate cities they constructed out of metals and their advanced use of the wheel. They made up a rainbow selection of glittery paints they made out of mica, a mineral that is still used to this day. They had a great understanding of astrology so much that one of their pyramids “Chichen Itza,” was oriented to the suns locations in the spring and fall equinoxes.

Oliveira, Ivo “The 2012 phenomenon: The End of The World?.” Fairobserver.com, 24 Feb. 2012. https://www.fairobserver.com/culture/2012-phenomenon-end-world/. In this web article written by Ivo Oliveira, she states all of the worldwide panic going on and the explanations of what will happen on the unavoidable date of December 21, 2012. There are some new age movements which believe the end of the Mayan long count calendar to be start of new human spiritual enlightenment, leaving behind what they call “Age of Decline.” Others have the doomsday theory. These people are sure that the winter solstice happening on that day will do something devastating to the world.
Posted by Dr.Ms.Amanda at 12:00 PM